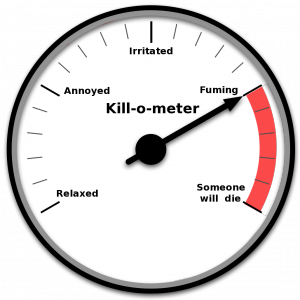 Is it spelled kilometer or killometer? I can never get that right…

For those who keep asking me “how’s the market been the last few weeks”, take a look at the CME Volatility Index for a rough idea (see the 5 year chart).

Another amusing bit I ran across was Central Banking Explained.

While I was on paternity leave, my office mates decided to, er, pack up my office.

On a spur-of-the-moment gag, I asked one of our Site Management guys to print out a giant “You Suck” banner on the plotter at work for one of my co-workers. Once he started working on the banner, it took on a life of it’s own. Eventually we ended up building a frame and mounting it to poster board so it would be free-standing. Thanks to the ladies in security for the photo.

While most people would see this as childish and immature, anyone who knows the co-worker pranked would say this is right up his alley. So Andrew, Thanks for coming in today.

We’ve been in Chicago a week now, and I swear it must snow every day. Not the kind of heavy snow Virginian’s see (on the rare occasion it actually snows there), but rather a light snow which blows about for hours but hardly sticks to anything. And although 20 degrees here certainly feels colder than in Virginia (perhaps because I’m walking in it for 15 minutes to work instead of the short jaunt from the car to the house or office), I think I rather like this fourth season people seem to be calling “winter”.

I started my new job on Monday and have been pleasantly surprised. The recruiter made CIG out to be a mad house where everyone works 18 hour days and sells their soul to the company. Although I can’t speak for the hours their front office personnel put in, it seems as though their IT department runs like any other hard working IT department. The company seems to care less about titles and management and far more about getting things done, and as such, I’m looking forward to what lies ahead.
To make things even busier, we put a contract on a house in Evanston on Sunday, and negotiated a final price of $527,500 by 11pm Tuesday. We have a home inspection slated for 10am Saturday morning and are still working on loan approval (since our house in Virginia is still for sale). Here’s to hoping that by Saturday everything will have worked itself out so that we can close on March 13.

Last night I had one big final get-together with a bunch of my current and former AOL coworkers at Breaker’s Billiards in Herndon. Beer, pool, food, and friends. Now I remember why it was such a hard decision to leave.

A big thanks to everyone who came out, and to everyone who pitched in for the really really cool schwag. And a huge thanks to Jill for putting it all together. You guys rock, and I’m definitely going to miss you.