One of the best upgrades I did to our last camper was to install 200 watts of solar power in 2016.  That upgrade let us camp for weeks off-the-grid out west, where dispersed camping and most of the campgrounds don’t have electricity.  So when we bought a newer trailer this spring, I already knew what my first big upgrade was going to be.

On the old camper, I used a pair of 100W flexible solar panels and mounted them to the roof using Eternabond tape.  That worked OK, though solar panels lose efficiency as they get hot so when we should have achieved the most benefit at high noon in August in Moab, UT they weren’t actually any more effective than at 3pm in Illinois in May.  Also the protective laminate coating on the panels began to cloud up a bit and peel after the first year, degrading their effectiveness.

When I purchased the solar equipment for the Surveyor I never expected to have the camper for more than 5 years, but I intend to keep the Lance for at least a decade until all three kids are out of the house.  On top of it the 200W flexible panels were sufficient to go about 3 days in a cloudy environment before needing a full day of sun to recharge, but I wanted to be able to run indefinitely on our setup.  So with the new camper, I also wanted to install higher quality, higher efficiency, and more powerful components.

To start, I ordered a pair of Newpowa 175W solar panels, and a Renogy Commander 40A MPPT charge controller, with remote monitor.  The Newpowa panels are monocrystaline and therefore slightly higher output (19.06V) than the comparable 160W polycrystaline Renogy panels, but are the same size.  That was important to me as it should allow me to use a different panel in the future if one becomes damaged or the Newpowa panels turn out to be garbage without moving the mounting brackets.  Monocrystaline panels are slightly higher voltage and therefore slightly more efficient in cloudy and low light conditions, which is a bonus, and the MPPT controller should be more efficient and provide better battery maintenance than the cheap PWM controller I used in the last camper.

Similar to the last camper, I wired the panels in parallel using 8AWG wire and ran everything through the roof to the charge controller mounted in the front of the pass-through, and then underneath the camper along the frame to the battery.  All the wiring was wrapped in plastic wire loom, and all entry points into the roof or floor were sealed with Dicor. 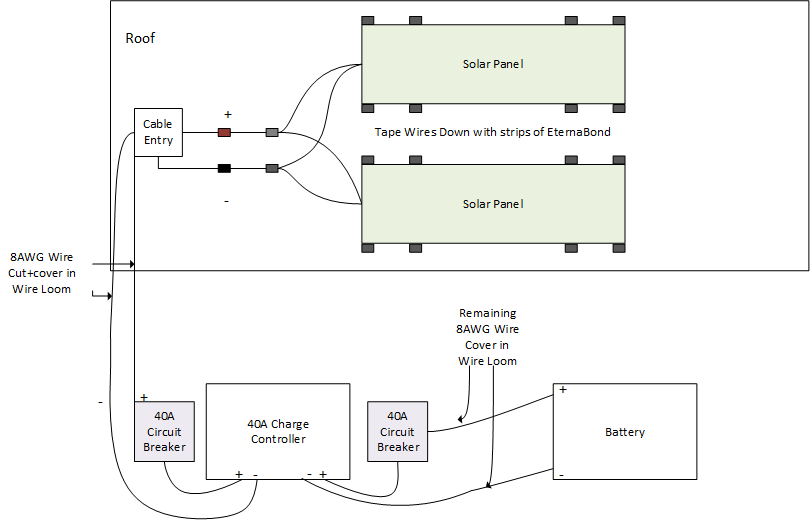 Before getting started I contacted Lance customer service and they kindly provided a number of PDFs for my model year 2185 camper that I used to determine where roof studs, 12V, and 120V wiring were located.  If you have a 2015 Lance 2185 trailer you can download them from Lance Roof/Ceiling Schematic, or if you have another year or model just call Lance and they can provide ones specific to your roof.

I mounted the panels to the roof far enough forward to ensure that shadows from the A/C unit or other roof-mounted accessories were minimized, but I wanted to leave enough space that I could step to the front or outside of the panels if necessary. 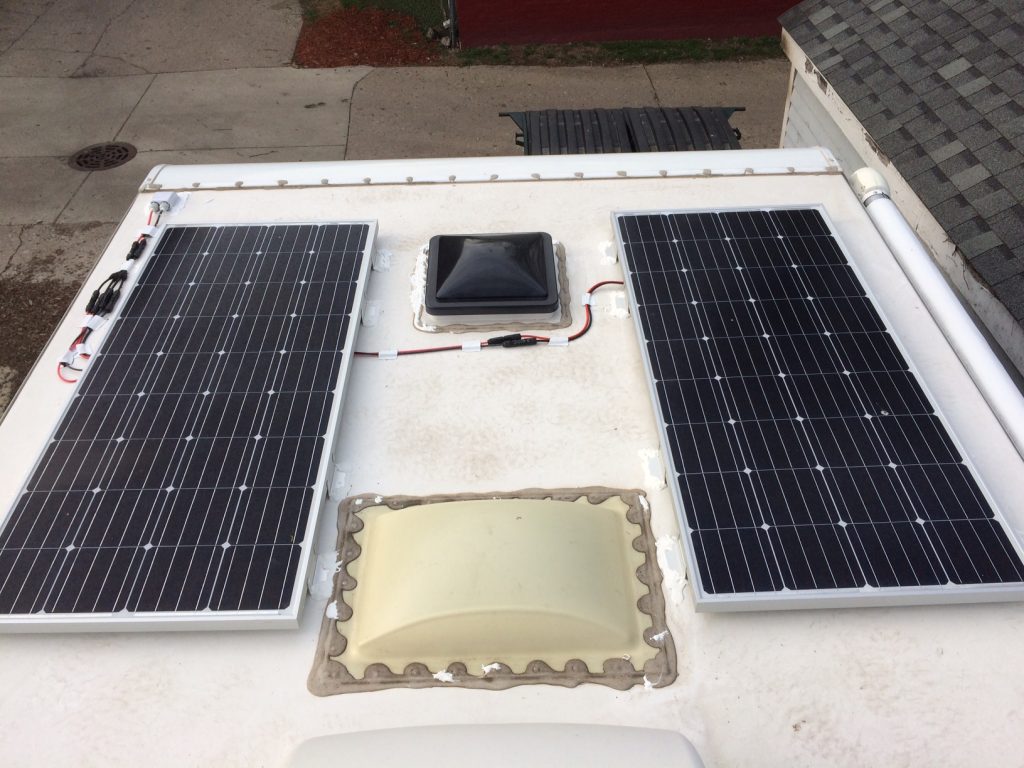 Lance suggested using rubber well nuts to mount the panel feet to the roof instead of basic lag bolts. 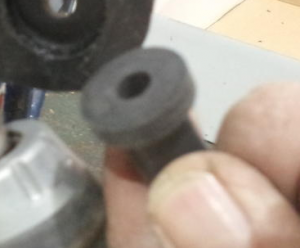 While cleaning out the holes for the well nuts was time consuming and hard on my fingers, in the end I think it makes sense – the rubber well nuts should seal the hole even without Dicor and the Luan roof is only 1/4″ thick so a lag bolt wouldn’t have sufficient holding strength. 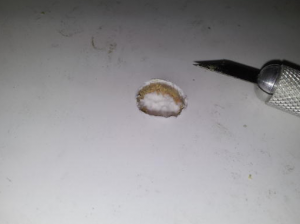 Although I didn’t take photos of it, after inserting the well nuts I ran a thick bead of Dicor non-sag sealant around the holes before installing the feet.  Then once all the feet were properly attached to the roof I covered the bolt heads and feet edges with Dicor self-leveling lap sealant.  The only place that didn’t get a second application of Dicor was the inside edge of the feed underneath the panel. 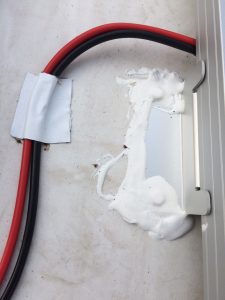 While I would really like to apply some, the panels only stand about 1″ above the roof, which is barely enough for me to squeeze a finger behind them and nowhere near tall enough to manage a caulk gun.

All the wiring was taped down with Eternabond.  If you’ve never used that stuff, it’s amazingly strong and truly can’t be pulled up once cured without significant effort.  I may cover the wiring completely in the future just to protect it from UV exposure. 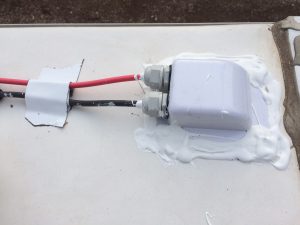 Cable routed through a cable gland into the wardrobe

To route the wiring from the roof into the trailer many people run their wiring down through their fridge vent.  While I considered this option, it presents two issues.  First is that getting to the wiring involves removing the fridge, which is heavy and really a non-trivial job.  Second and more important to me is that voltage decreases over distance, and using the fridge vent would add about 15′ of wire between the panels and the charge controller, rendering the panels less efficient and ultimately producing about 5W less power. (For those interested in the math, the 175W panels generate 9.18A @ 19.06V.  15′ of 8AWG wire reduces that to 18.89V.  Assuming maximum amperage doesn’t change 9.18A @ 18.89V is about 173W).  So instead of using the fridge vent, I opted to run the wiring straight down through an interior cabinet and into the pass-through. 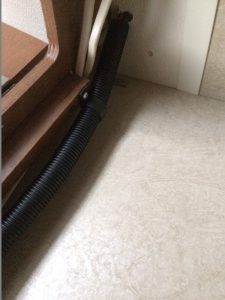 Wiring enters through the roof 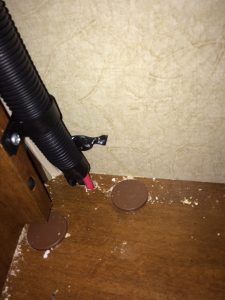 Wiring ran down the inside of the wardrobe inside wire loom 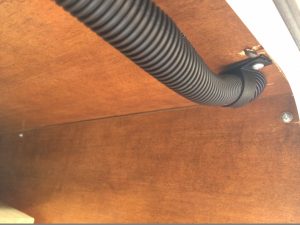 Wire into the pass-thru is wrapped 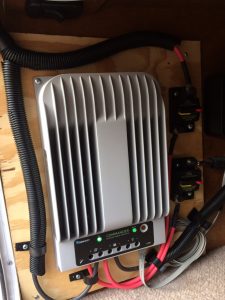 Charge controller, wiring, and breakers all set up

To get the wiring to the battery I drilled a hole in the trailer floor, wrapped the wire in wire loom, and ran it underneath the trailer along the frame directly to a 100Ah AGM battery.  Side note: I used marine-grade tinned copper lugs for all bolted/threaded battery connections (10-32 for the breakers, 5/16″ for the battery itself), a good crimper, and heat shrink to keep the connections stiff.  Annoyingly the Renogy controller didn’t come with a battery temperature monitor, so I ordered that separately on Amazon and will install it once it arrives. 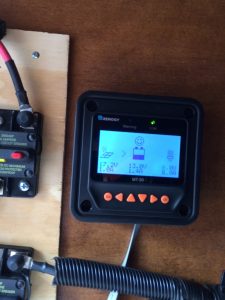 I’ll provide updates about the effectiveness of this setup once I’ve run it for a bit, but so far I’m pretty happy with the result.  About the only thing I would do differently in the future is to use L brackets to mount the solar panels instead of the solar panel-specific Z brackets I purchased.  The aluminum Z-brackets work fine, but because they mount the panel so low to the roof if I ever need to remove the panels I will need to remove the feet from the roof.  Simple L brackets mounted into the side of the panel frame rather than the bottom would be easier to remove in the future.  For those interested in replicating this setup, I’ve published my PartsList along with costs and links.

Of course owning a trailer is like owning a boat – there’s always more work to be done.

Currently lithium batteries are too expensive to use, but as the price for LiFePO4 batteries comes down I will eventually switch.  My 100Ah AGM battery cost $180, weighs 66 lbs, and can only be discharged to about 60% before it starts to damage the plate.  Two AGM batteries would give me 120Ah usable capacity and would cost $360 but weight 132 lbs.  A single 130Ah lithium battery would provide 117Ah and weight less than 30 lbs, but currently costs about $1,000.

The remote monitor for the charge controller tells me how much power is being delivered to the battery bank, but not how much I consume.  Eventually I will wire in a shunt and a full battery monitor.  I really like the SIMARINE Pico Blue but given the cost will probably start with a $30-40 basic LCD model.

The majority of the trailer runs off 12V power (lights, water pump, stereo, TV, fridge, and heater), but no way to readily power 120V appliances.  We really don’t use the microwave and I can live without an air conditioner, but it would be nice to make a pot of coffee in 5 minutes with the Mr Coffee instead of 40 minutes with a percolator, and I know Christi would like to be able to dry her hair once in a while when we’re on a long trip or recharge her laptop if she wants to spend some time writing.  I’m considering a 2000W pure sine wave inverter as part of next year’s upgrade.

If I ever need more power, there’s still enough space on the roof to add a pair of 50W-100W panels in series to the existing setup.  Shadows from the A/C might render it less effective in the morning and evening though.

This spring we decided to sell our 2005 Forest River Surveyor 235RS camper and upgrade to a 2015 Lance 2185.  The Surveyor served us well since purchasing it in 2012, but the boys are growing up and sharing a bed had meant more and more scuffling over space, blankets, and one of them kicking the other.  On top of that the floor space was tight, and with the Land Cruiser we now have plenty of towing capacity.

After looking around I discovered that I could count the trailer models with triple bunk options manufactured this decade on two hands.  I seriously considered the Dutchman Aerolite 2423BH/242BHSL, which had a really cool storage and lift system for the bunks.  However the carrying capacity was quite low – so low that we wouldn’t be able to carry water, bikes, and all our remaining gear together – and Dutchman confirmed the rating was limited by the axles and not just the tires.  Also it was a full 4′ longer than our current trailer, which meant I might have to give up our nearby alley parking space.

After far too much analysis on size, capacity, quality, and price, we ended up deciding on the Lance 2185.  In terms of the layout it had everything we wanted – triple bunks, a slide out dinette, a walk around queen bed, and a (convertible) sofa.  At about 4500# empty and 6000# gross weight it was a fairly light weight trailer, and best of all it was only 16″ longer than the Surveyor.  I searched RVT.com and RVTrader.com, spoke to the local Lance dealer, and then started looking nationally for a good price with the intention of picking it up or shipping it back to us.  In the end we ended up purchasing a 2015 Lance 2185 from Camping World in Wauconda, IL, as it was almost half the cost of a similarly equipped and delivered 2018. 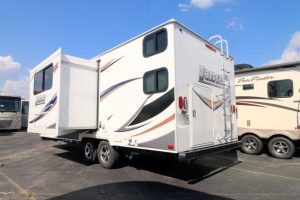 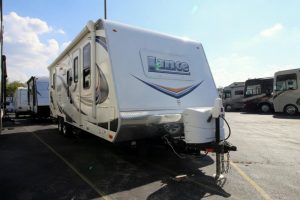